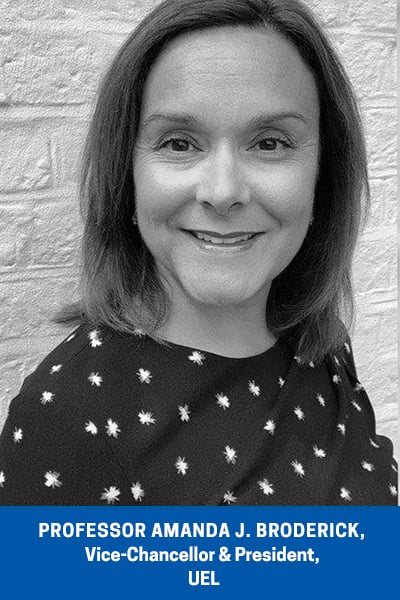 Amanda is an eminent social scientist, she has held Chairs in International Business and Marketing at multiple institutions in the UK and Visiting Chairs internationally.

Before moving to UEL, Amanda was Chief Executive Officer at Newcastle University and before that she was Pro-Vice Chancellor (International Priorities) and founding Executive Dean of the College of Business & Law at the University of Salford.

She is also an award-winning researcher whose expertise lies in the fields of international business, marketing psychology and strategic communications. 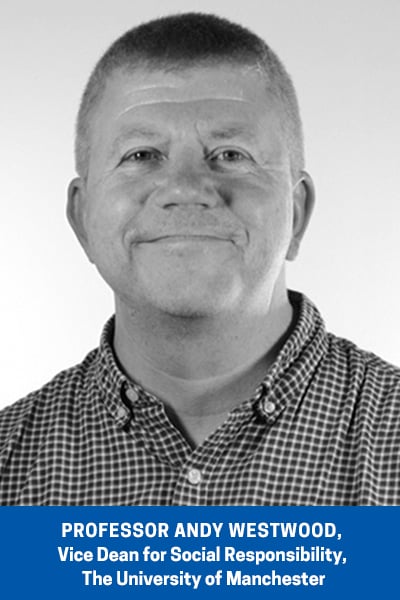 Andy Westwood is Vice Dean for Social Responsibility in the Faculty of Humanities and Professor of Government Practice.

He is a Visiting Professor of Further and Higher Education at the University of Wolverhampton, President of the OECD Forum on Social Innovation and an expert adviser to the IMF.

Previously Andy was a Professor of Politics at the University of Winchester and Chief Executive of GuildHE. He has also worked at a number of think tanks and in Whitehall for many years as a special adviser to ministers on education, skills and science policy at the Department for Innovation, Universities and Skills, and as a senior adviser at HM Treasury and the Departments for Education and Communities and Local Government.

He writes regularly for Policy@Manchester, WonkHE, the Times Education Supplement, the Times Higher Education magazine and The Guardian. Andy graduated from the University of Manchester in 1989 with a degree in English and History and was Events Officer at the Students’ Union during that time.

Jonathan Morgan joined Queen Mary from the University of Roehampton, where he had held the position of Academic Registrar since 2009. He holds responsibilities for matters relating to corporate and academic governance, including the management of academic quality and standards, academic regulation, registry services, admissions, the Student Information System (SIS) and information compliance.

Jonathan led the strategic direction of the University of Roehampton's Academic Registry, heading a staff of almost 100 working in the university's central administration and across academic schools and departments. His key achievements included the implementation of a new administrative structure for the university, leading to significant economic savings and a more consistent and professional approach to academic administration across Roehampton. Under Jonathan's leadership, the department introduced a paperless admissions system, overhauled the university's student records and supported a successful QAA Institutional Review. 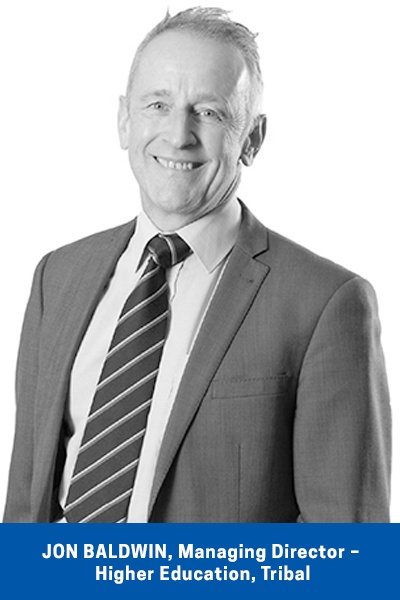 Jon joined Tribal in May 2014 from Murdoch University. Jon has also held management, teaching and administration posts at University Warwick, Queen Margaret College, Edinburgh and Lancashire Polytechnic, as well as teaching at the Open University and in Further Education, and publishing papers and articles on a wide range of education-related topics.

The Ethics of Student Data

A GUIDE FOR HIGHER EDUCATION INSTITUTIONS

Working with the Higher Education Policy Institute (HEPI) and Youthsight, we contacted over 1000 undergraduates from a wide range of institutions and backgrounds and who were engaged in different periods of study, to make sure we really understood the issues that are important.