The North East Surrey College of Technology (NESCOT) is leading the way in student communications, using Tribal Engage app technology to take the next step in student experience. Through the use of NESCOMMS, their own college app and private social network, they’ve brought their learners and tutors closer than ever before.

Prior to using app technology, Nescot was experiencing low engagement with teacher to learner emails, finding a poor response rate and bad email housekeeping were causing their students to miss out on vital communications. Tutors and staff were calling for a quick and efficient contact method so that they could get to students effectively.

Now the NESCOMMS app communicates with students in their own language, providing immediate, relevant messages from their tutors and fellow students, keeping them on track, supported and engaged. 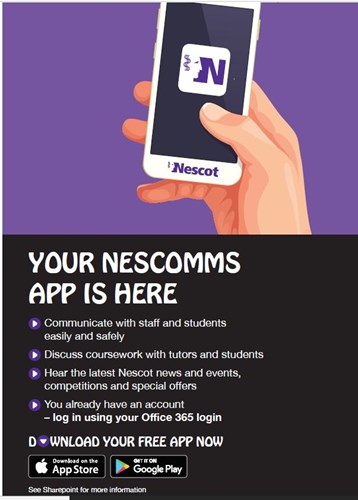 The convenience of the app is what students expect, learners are far more responsive to an app notification than an email, and the college has seen a huge improvement in engagement rates with over 40,000 messages posted since its launch in October 2017. Tutors can extend learning activity outside the classroom, in an easy and accessible way. They can share a single resource article or website that is relevant to a lesson, without fear it will be buried in an email trail or left ignored in a student’s inbox. Tutor and staff time is better spent, with more streamlined activities through the app.

“The app has really changed the tutor’s approach to teaching and how they deliver their learning resources, helping them with differentiation and their journey to deliver outstanding teaching and learning. Some tutors have stated that they have been waiting a while for an app such as this to be available for them. The Student Engage app is what the further education sector has been crying out for, it’s great to see Tribal are leading the way with collaborative and innovative technology.”

Other features staff have found particularly useful include:

“Nescomms has been a fantastic asset to me and to the department. Having the ability to add images, GIFs, documents and links into the messages transforms how we communicate with our learners. Importantly, it has significantly improved how learners communicate and engage with us.”

An Ofsted recommendation from 2017 for Nescot was to improve the community and engagement of students. The NESCOMMS app has allowed the college to launch a wider engagement programme for students. There’s been very little misuse from students, and student feedback has been extremely positive.

To ensure uptake when the app was released in October 2017, Nescot held a CPD day with tutors to train them to use the app effectively. There was also a tutorial recorded for student use, and a countdown started to get students ready for the launch.

“Feedback from a number of tutors after the training day was that it was the most useful CPD training that they have ever had. Paul’s presentation and training style changed the way they think about teaching, and how they approach and deliver learning.”

Nescot have also appointed some of their tutors as ‘Progress Coaches’, who act as ambassadors for the app. They run tutorials and are engaged with personal communications with students, posting memes and motivational images to keep the app content conversational and relevant to the students.

Nescot are planning to extend the careers and employability aspects of their app, creating virtual notice boards on careers and a dedicated careers guidance area. They also continue to ask for student feedback on what they expect from the app, and what improvements they could make moving forward, which is fed back to Tribal.

“I am delighted to see the wide-reaching effect the Tribal Engage app is having in Nescot. I introduced the app to them, knowing they are always wanting to be at the forefront of technology. The app has not only improved the communications culture in the college but has also allowed them to streamline their business processes and make more efficient use of staff time and resources.”

Want to know more about how app technology can help support the student experience?